What is an adverb In French? Types and examples of phrases

Home » DELF » DELF Grammar » What is an adverb In French? Types and examples of phrases

What is an adverb In French? Types and examples of phrases

If you’re looking to get a little more familiar with adverbs, this is the article for you. In the next few minutes, we’re going to dive into the following topics:

By the end of this article, you’ll be an adverb expert! Let’s get started.

General rules on adverbs in French

So what exactly is an adverb? They are a part of speech, modifying verbs and adjectives, or even prepositions and other adverbs.  To refresh your memory, take a look at these examples:

There are two main methods of forming adverbs in French. Here’s the first:

Many adverbs can be formed using this method, such as heureusement (“luckily”) from heureux (“happy”, “lucky”).

For adjectives ending -ant and -ent, follow this method instead:

These methods work most of the time but watch out for irregulars! Where do I put an adverb in a sentence?

When it comes to placing an adverb in a sentence, there is no one golden rule, as it can depend on the type of adverb and the context of the sentence. Generally speaking, you can follow one of the following structures:

Study the below examples to see these different structures in practice:

The ten types of adverbs

There are lots of types of different adverbs in French, which we can group into about ten categories depending on their function. We’ve provided some examples below of adverbs in each category, but there are many more to choose from.

Adverbs of place describe where an action occurs. For example:

Adverbs of time describe when an action occurs. For example:

Adverbs of quantity describe how many or how much. For example:

These adverbs compare two or more things. For example:

Exclamative adverbs are used to describe surprise. For example: 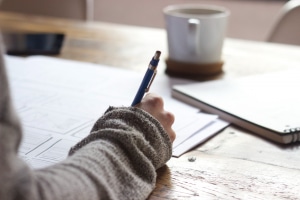 Adverbs of frequency describe how often an action occurs. For example:

Negative adverbs are used to turn affirmations into interesting negative statements. For example:

Interrogative adverbs are used to form questions. For example:

Adverbs of manner describe how an action occurs. For example:

These adverbs in French are used to represent a place, quantity or preposition. There are two:

GlobalExam is an e-learning platform dedicated to languages and communication. We’ve devised study materials, exercises and tests specifically to help you learn and improve in French, whether you’re a beginning or advanced speaker. With a GlobalExam account, you can get access to detailed grammar sheets, training exercises and exams to help you meet your goals.

Still got some questions about adverbs in French? Head to GlobalExam and use our handy search tool to find all the relevant grammar material to help you get it straight. Good luck!